Today I’m sharing another extract from my book – The Ringmaster’s Tale – discussing just how useful special interests can be when you’re parenting an autistic child (or adult). It’s perfectly understandable that at times you’ll feel like your child is unreachable, and the struggle to teach them new life skills can be disheartening to say the least, but with some perseverance and a bit of creative thinking, you might just find that the answer’s been right in front of you all along.

By its very nature, your child’s autistic brain wiring will make it seem as if they don’t actually want to learn new things a lot of the time. This isn’t true of course, but what is true is that they’ll have a deep, almost obsessive interest in some very specific things to the exclusion of pretty much everything else, and this can make learning new skills incredibly hard.

Dinosaurs, space, LEGO and trains are all very common fascinations for autistic children and they’ll be quite happy to repeat the same behaviours over and over again as long as they involve whatever their specific interest is at the time. If you want them to progress, you’ll have to entice them out of these rigid routines or they’ll get stuck.

Now, when my boys were young I was told the best way to do this was to take their special interests away, because apparently this would ‘make them’ become interested in something else. It was the ‘he’s got to learn’ mentality and just so you know, this doesn’t work with autistic children so save yourself (and your child) a lot of heartache and use a different approach. Since my eldest son Christopher’s LEGO and my middle son Dominic’s trains were the only things that gave them any peace of mind I thought it sounded downright cruel to take them away and flatly refused to do it, much to the disgust of my family and all the specialists. Instead I used their interests to build a relationship with them and help them learn, and thankfully this is the very advice given to new autism parents today.

So as I said, in the ongoing battle to widen your child’s life experiences you’re sometimes going to have to push them outside their comfort zone, and yes it’s going to seem like you’re in the middle of a war at times, but their special interests can act as a ready-made secret weapon to make the struggle a whole lot easier. You’re going to have to be inventive here but with a bit of creative thinking you’ll soon find ways to incorporate them into the learning process. If you can get to the point where your child’s love for their special interest is stronger than their fear of completing the new task, their motivation will change and you’ll start to get things done.

For example if your child is obsessed with trains but can’t cope with noisy, crowded environments, start by showing them footage of steam railways and build up to taking them for a day out on a steam train. Once you’ve mastered that you can repeat the process using more modern trains and with luck you’ll eventually reach the point where they can tolerate catching a train in the middle of rush hour. To your child this might seem like having fun, which it is, but it’s also a great way to teach them new life skills. It won’t all be plain sailing of course – there’ll be plenty of setbacks, I’m sure – but doing things this way, with your child’s special interest at the centre of it all, will definitely make the learning process a whole lot easier.

You can buy a copy of The Ringmaster’s Tale here: www.tinyurl.com/theringmasterstale 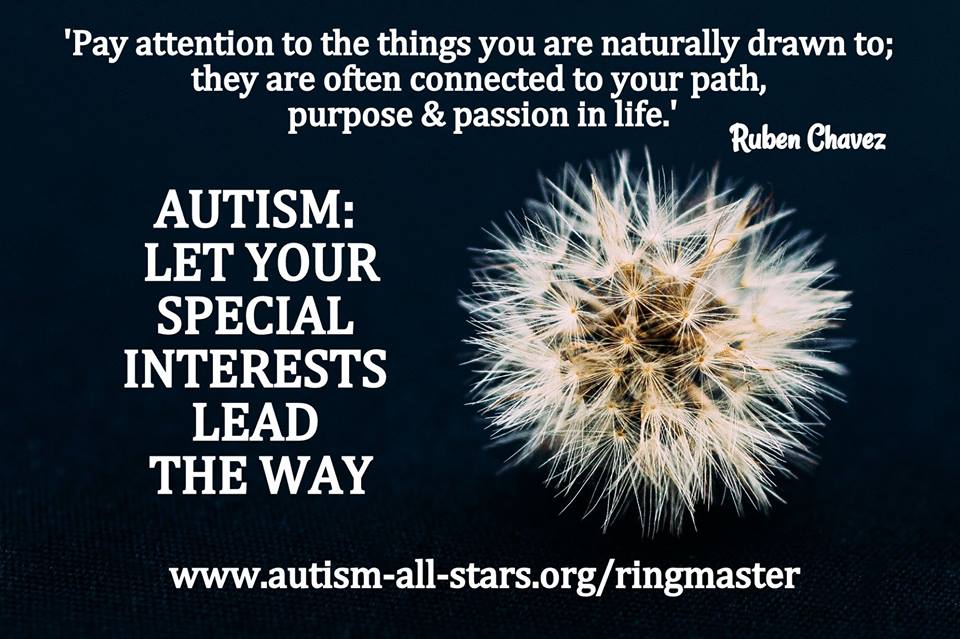 Now, what about those other common interests I mentioned? Well, let’s carry on with the creative thinking and see what we come up with.

Imagine your child is obsessed with space and they’re studying the Vikings at school. How would you engage their interest in something that seems so different from their specialist subject?
I’d start by asking them to look at the different names the Vikings gave the constellations, then work together to find out more about the mythology that surrounded their version of the cosmos. This could lead to a discussion about the Viking gods and goddesses, highlighting which character traits and values their society found most appealing. Which of these values to we still admire today, and which have changed? And so on, and so on.

LEGO, meanwhile, has endless possibilities for helping your child learn new skills; so much so that you can now enrol your child into a course of LEGO therapy, or even buy your own book about it and do it yourself.  It can be used to help build language, learn about shapes, colours and numbers, improve manual dexterity and all the obvious things, but it’s also great for building and enacting social stories about people living and working together as a team.

Taking it a stage further, you could look up local buildings together and find one that appeals to your child, then arrange a day out to photograph it so you can recreate it in LEGO at home. This may seem like a simple thing, but can lead to all kinds of new passions emerging. Christopher loved to photograph buildings and went on to graduate from Leeds University with a First Class Masters degree in Architectural Engineering, so you really never know where this kind of thing might lead.
If your child loves LEGO then chances are they’ll also like Minecraft, which will help them no end with their computer skills. The good news is that it’s such a popular interest for people on the spectrum that you can now join the world’s only autism-friendly Minecraft site here: https://www.autcraft.com/

Last but not least come dinosaurs. Clearly the world will always need palaeontologists, just as it will always need Master Builders, so there’s definitely the option of pursuing this as a career, but how can you use it to teach your child about the other possibilities life has to offer?
Perhaps you could compare several different dinosaurs to the living creatures we have today, and see how they differ. How much food might a dinosaur need and what kind of environment would they require to stay healthy? This could lead to a discussion about environmental change and the care and protection of different species. You could also talk about the fields of Geology, Archaeology and Biology, using examples of how the time of the dinosaurs has influenced modern thinking in these areas.
On a smaller scale, you could use model dinosaurs to help with adding and subtraction, or encourage them to write poems and stories about dinosaurs, exploring how people might feel if they came face to face with one today.

The bottom line is that these special interests really are the key to reaching your child, entering their world and connecting with them on their own terms. Using the things their children love to engage with them is really what all decent parents do (think ‘princess parties’ and ‘football games’); autism parents just need to do it with a bit more flexibility and determination, but if you keep thinking creatively, you’ll get there, and by taking this journey together, you’ll enrich not only your child’s life but also your own.