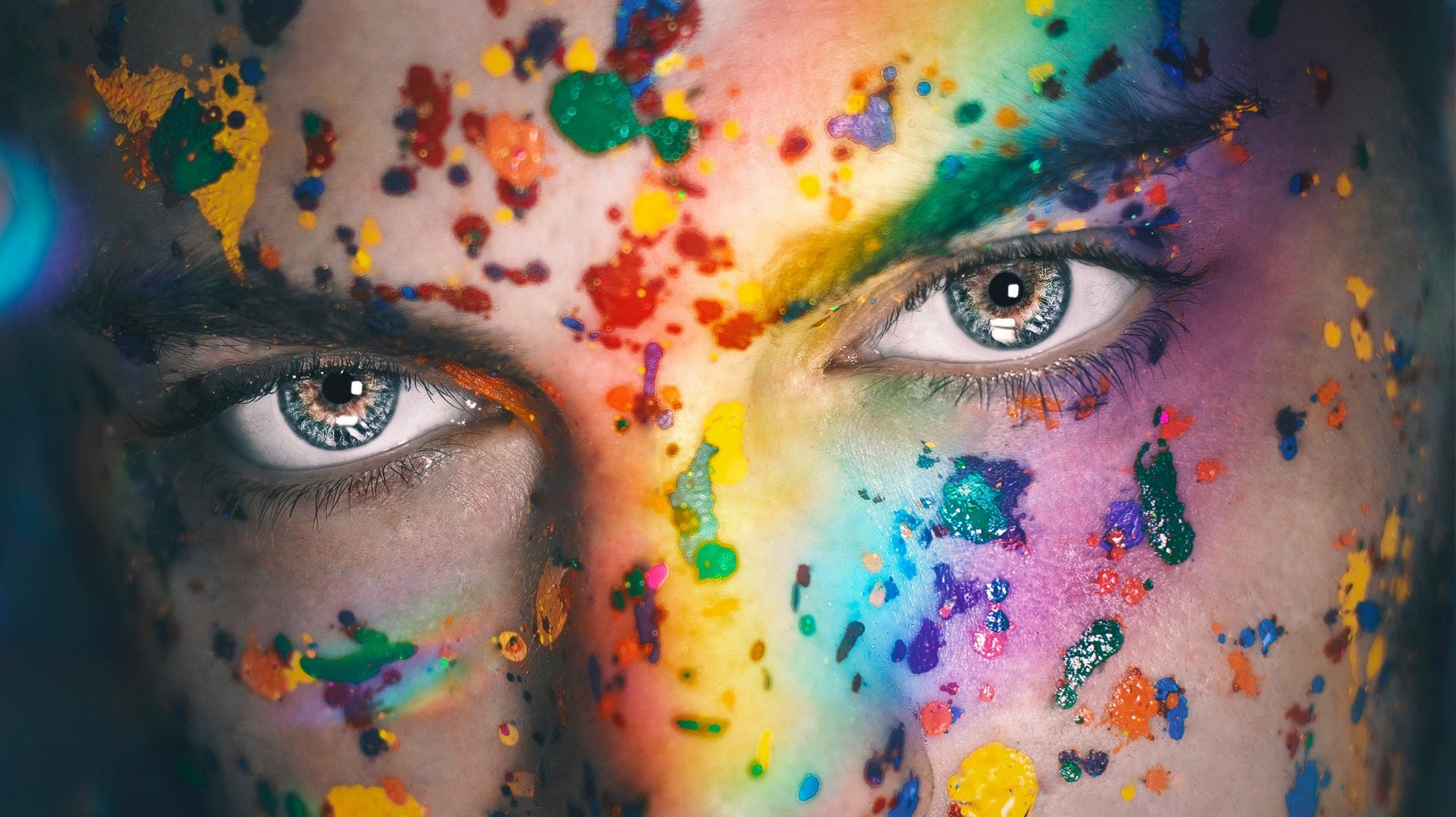 What if I told you that one of my three sons was diagnosed as the most profoundly autistic child several specialists had ever seen; that he had no spoken language ’til he was almost five and regularly mutilated himself, smeared poo round the house and physically attacked me every day for many years: bruising, scratching and biting me with all his might? Would that represent autism to you? Maybe, maybe not.

What if I told you that one of my three sons graduated from a highly prestigious university with a degree in Law and Politics; that he lives in his own house, has a great job in central London and is engaged to a beautiful young woman who genuinely adores him? Would that represent autism to you? Again: maybe, maybe not.

But what if I told you these are both descriptions of the same son? Then what would you think? Perhaps you’d believe he must have grown out of his autism, or maybe that he’d been misdiagnosed when he was younger. Possibly you’d decide that he had to be a one-off – a freak of nature unlike any other person on the planet. In each case I can totally understand your thinking, but in each case you’d be mistaken.

My son’s story might be unusual, but it’s far from unique, and since there are millions of people living with autism across the world, there are millions of different stories too, each representing a living, breathing person with their own thoughts, feelings, experiences and ideas. So how can we ever hope to represent it?

That’s the thing about being autistic: it can’t be represented as either one thing or another, any more than being human can. It also can’t be represented as something that affects a particular person in the same way all the time, because autism simply doesn’t work like that; it ebbs and flows, sometimes staying quietly in the background, and at others becoming quite overwhelming.
Since it’s described as a ‘spectrum’ condition, it’s easy to understand why people might think it’s a straight line running from severe to mild, with everyone having a fixed place somewhere along it, and being affected by it in the same way every day, but in reality the autism spectrum is a very different thing indeed.

In my book,‘The Ringmaster’s Tale’, I describe it as an ever-changing kaleidoscope, and say:
“Although every kaleidoscope works using the same basic mechanism, each one produces an endless variety of different shapes, patterns and colour combinations which is what makes them all so unique and fascinating. In the same way, while people on the autism spectrum might show similar behaviour traits because they have a similarity in brain wiring, each individual autistic person will develop their own unique personality, perspectives and ideas. Autistic people don’t experience life in a straight line any more than neurotypical people do; their sensitivity grows and shifts, expands and contracts depending on the tiniest of details and the smallest of changes.”

Representing one person with autism is difficult enough then, because of the way its effects change from moment to moment, but when it comes to the entire autism spectrum, it’s pretty much impossible. 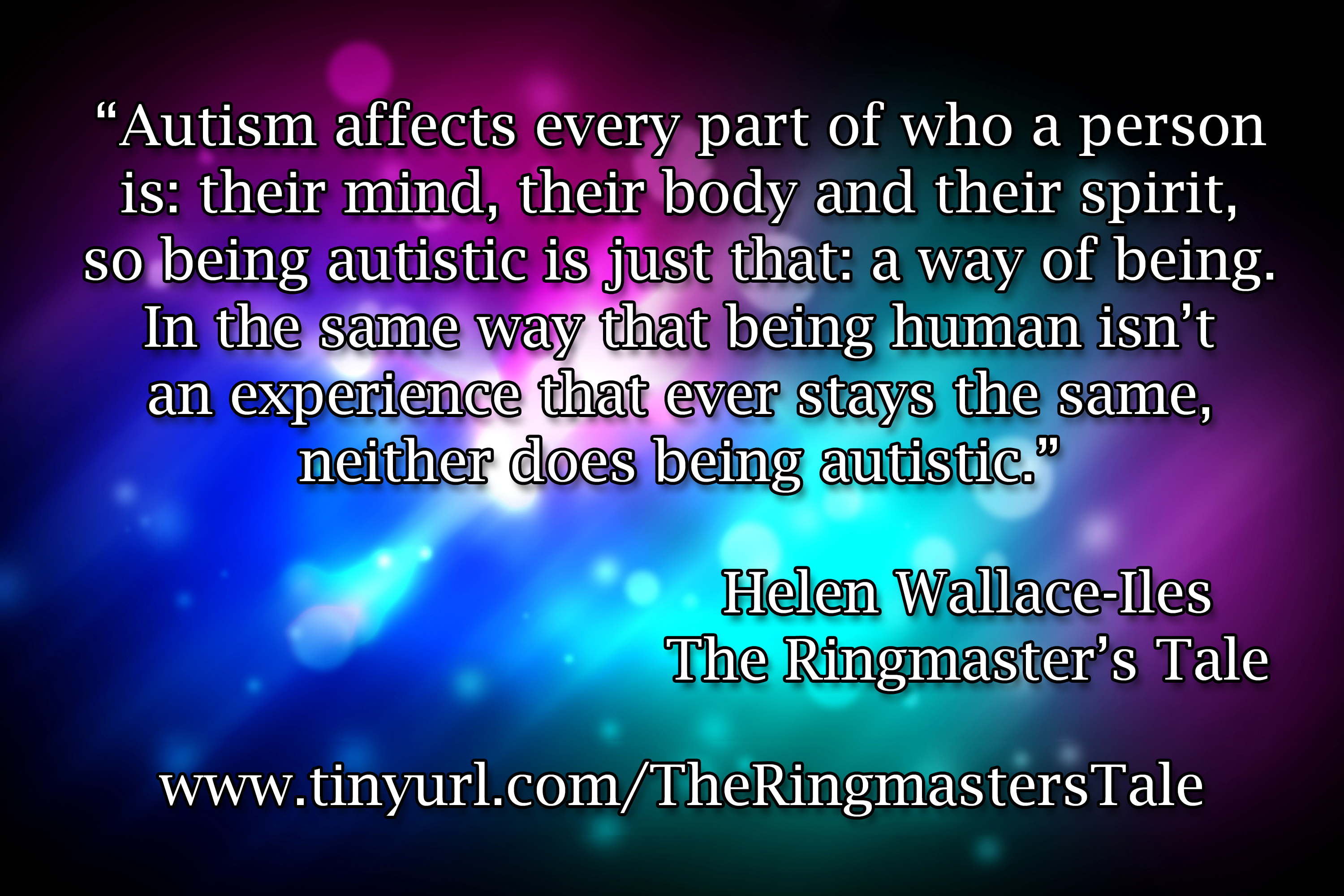 One of the criticisms I hear most often from autism parents – and autistic people themselves –  is that a particular article ‘doesn’t represent my experience of the condition’. They’ll complain it’s either too positive and doesn’t show the seriousness of just how disabling living with autism can be, or too negative and doesn’t highlight the fact that autistic people can achieve great things in their lives. The truth is, when it comes to autism, if you’re going to describe anything or anyone specific, you’re absolutely going to fail to represent a lot of autistic people, because everyone’s experience of the condition is so unique.
Think about it this way: is there a one-size-fits-all description that sums up what it means to be human? Of course not, but does that put anyone off trying to describe it? No; instead it inspires people to explore every aspect of the human condition, doing their best to unravel its mysteries in new and intriguing ways, in the hope of giving us a deeper understanding of who we are.

I watched a great documentary once called ‘Chris Packham: Asperger’s and Me’ about the life of one of our much-loved TV presenters and wildlife experts. In it, Chris describes how he fought against being autistic in the past but has now come to accept and embrace it, and makes the very important point “I’m not a typical autistic person, because there is no typical autistic person.” There are those who’ve criticised the programme for its failure to highlight the more severe nature of the condition, believing it gives people the wrong impression of what autism is, but that’s not how I feel about it at all.

It seems to me that the only way to truly represent autism is to keep on putting a whole variety of information out there for everyone to see: writing about it, talking about it, making films and plays about it – anything and everything that represents all the different characteristics of the condition: the positives, the negatives and everything else in-between. Let’s look at it from every angle and introduce the world to our own personal experience of autism, whatever it might be. The more we do that, the greater chance there is of allowing people to put the pieces together and see the bigger picture, and ultimately of autism being understood and accepted in all its incredible diversity.

None of us can represent the whole of the autism spectrum, so instead of complaining when something doesn’t resonate, I’d much rather hear people applaud each other’s courage in sharing their stories with an often hostile world.

Here’s to recognising every lifestyle that’s highlighted, no matter how diverse, and appreciating them all for what they really are: different strands of the rich, vibrant and often breathtakingly beautiful fabric of life on the autism spectrum.